For now, this is the final addition to my Netherforge army, at least on new type units. 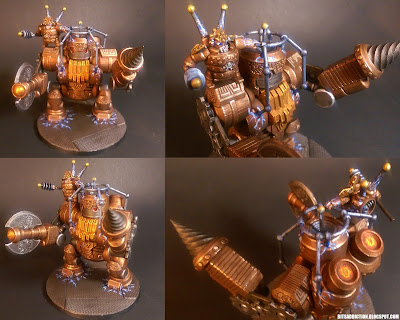 For now, I have no plans to print anything additional for this army, as I will be concentrating on getting a few more playtests in and finishing up the battletome, which is coming along really well.
Posted by M. Jared Swenson at 4:47 PM 2 comments:

I am now preparing some minis photos for my Netherforge battletome, so I needed some terrain for use at home. Then I realized "Hey! I have a 3D printer!"

I printed these designs because they make for quick prints that uses very little filament. Everything on the table there (except my Lord-Celestant of course) was printed on less than a single spool of $20 filament. I liked the original painting he did on his designs, and wanted to duplicate that, luckily good ol' Duncan did something similar.

However I did my painting a little different: 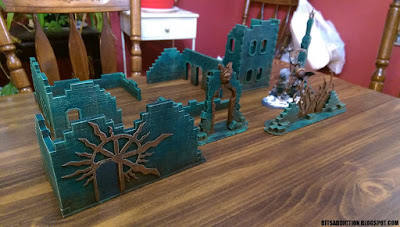 Posted by M. Jared Swenson at 8:00 PM No comments:

I just realized I have yet to post images of the finished display boards my brother and I brought to the Harvester of Souls this September. So better late than never! 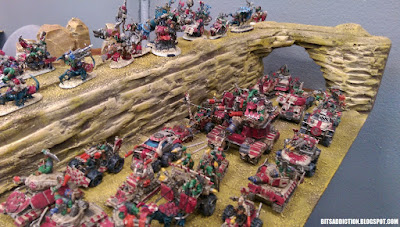 Jarom's turned out very well and was very popular among the tourney-goers. The reference to Mad Max was obvious to everyone, so mission accomplished. As you can see Jarom's army was unique in that it was all bikes and vehicles. Keep in mind, this was before the new codex and all the new vehicles. So you could say he was doing the Ork motorcade before it was cool. 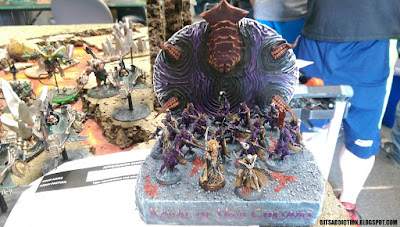 This was my miniature display board. I brought my Verminlord Skrax army, and didn't want to bring the sewer board again. The only new stuff in my list was a small battalion detachment of Kabals, so I did a display board just for them, also as a teaser for next year's big project for my space pirates. Depicted is a dark portal and a massive kraken-like creature emerging from it (the big head and tentacles are all 3D printed). Also on the bottom is the name of the Kabal, similar to the process I used to make the Coven's name plate.
Posted by M. Jared Swenson at 1:53 PM No comments:

I finished painting my Netherforge army. I got a pretty simple and easy painting method. Some of them were painted as per my previous post. I do like that there is little variety in painting, which makes sense for an army literally made on automated assembly lines.
Also, I was able to get a game in with these guys against my brother's Destruction. It was a good thing because I have adjusted a lot of the rules I had written for these guys, as well as come up with some tenuous points values for matched play. I will try to get a couple more games in against a few more guys before I finalize the Battletome.
Posted by M. Jared Swenson at 10:43 PM 2 comments: 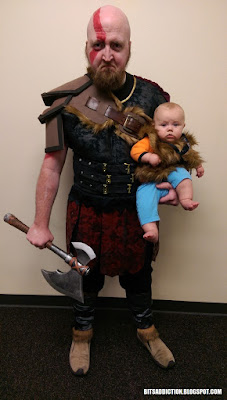 How to make a display board in 7 days

Or alternate title:
How to not freak out when your brother asks you to make him a display board at the last week before the event!
As the alternate title suggests, my brother and I are getting ready for this weekend's Harvester of Souls 40k tournament in Spokane Valley, WA. I already have my display board and army prepared.  My brother, however, is running a little behind on getting his army ready. So about a week before the event, he calls me up and asks me to make him a display board, nothing too fancy, but something to center his army. I agreed because his birthday is coming up soon, and this can be part of it. 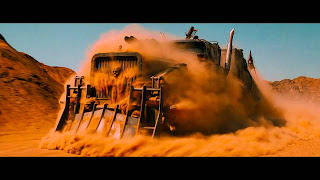 I thought about it a little. Jarom's ork army is pretty much 100% vehicles and bikes. Going for a Mad Max Fury Road theme. So I wanted to tribute a little to that movie (being one of my favorites), and rather than just doing a flat board with desert, I figured the mountain pass scene would be a cool scene to base it off of, especially since that scene employs bikes. I sketched it out and this is what I sent to him: 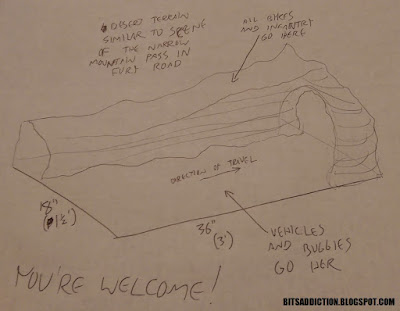 He liked the idea, so I began working on it. I had just recently watched this excellent video by one of my favorite YouTubers, and I was anxious to try the method out, so this gave me an excuse to do so. From here on out I pretty much just followed the video's instructions.
And that's it! A lot simpler and quicker than I feared, and I now love this construction method to make high cliffs. Today I'm prepping for the tourney this weekend so unfortunately I wont have a chance to show you the final board with Jarom's army on it until I take some photos at the event, so I look forward to that.

On another note, I realized I forgot to do a post on my army and display! So you will see that too at the event.
Posted by M. Jared Swenson at 1:30 PM No comments:

The Netherforge burns eternally somewhere deep in Chamon. Machines making machines, all according to the designs of their long dead designer, progenitor, and creator. A duardin known only as the Furnacelord. 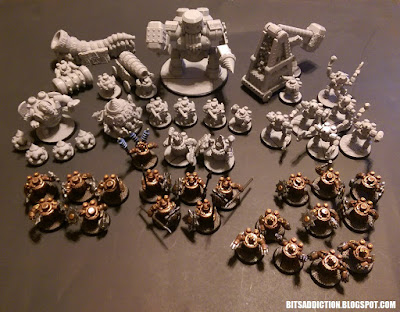 The Legions of the Netherforge is a homebrew Chaos army I am building for Age of Sigmar. I had found this collection of designs on Thingiverse by a very talented 3D modeler, Arian "Dutchmogul" Croft at Illgottengames. The entire range of models he designed captured my imagination. It was all low detail, designed for 3D printing, and I think actually looks very cool. I knew I had to make an army out of these guys.

So I downloaded the models, edited them a little in Tinkercad (mostly to prepare some alternate poses and weapon options, make their feet a little bigger, and removing their bases so I could do my own). I thought about what I could run this army as, but no ideas really satisfied me. So I am making their rules from the ground up. This way I can design some cool rules that I feel reflect the feel and style of the army. This also involves making a story for them (teased above) and changing the names of the models to fit the story.

I'm looking forward to finish painting these guys and get some games in. I will show of the rules for them I have designed and some more lore in a later post, as well as the battletome when I get it finished.
Posted by M. Jared Swenson at 8:00 AM No comments: 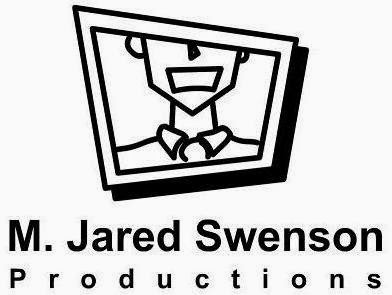